Entenda as diferenças do VAR na Inglaterra e no Brasil 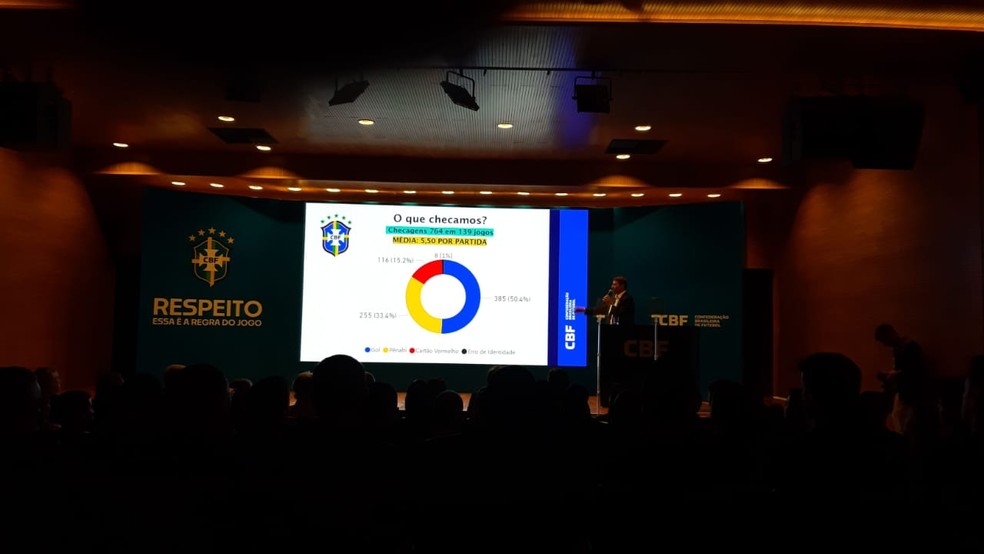 WITHOUT ALTERING ITS ESSENCE;

THIS PROJECT ESTABLISHES HOW TECHNOLOGY CAN BE APPLIED TO FOOTBALL REFEREEING WITH EFFICIENCY, SIMPLICITY, AND ALSO BRING ABOUT THE ABOVE BENEFITS.

a) to correct referee errors in clear, indisputable plays that alter       or may alter match results (goals, penalties and violent action);

b) to always legitimize match results;

e) reduce pressure on referees and prevent doubts on his dignity, as well as on officials;

a) Continuity of current refereeing system, adding to it “absolute conviction”;

c) Non—interruption of match; and

d) No (holding of) consultations.

The “VA” will act based on simultaneous televised image, with immediate replay possibility – generated by strategically placed cameras – a simple technology, available to all.

Communication with referees will be done preferably, by  electronic means of communication.*

4.1) doubt whether ball entered goal line or not

The “VA” will only act to indicate the ball exits when in same play or if in its context a goal or penalty was scored.*

4.3) definition of free-kick spots in favor of the offense, that happened within the limits of the penalty área The “VA” will only act to correct error regarding the place of the foul, or say, if in the area it was marked outside and vice-versa.*

4.4) scored goals and penalties, made possible and avoided due to    error in clear/undeniable foul plays (not seen or marked in clearly wrong manner)

The “Video Assistant” will only act in plays that do not require interpretation, or say, in fouls that are so clear, so undeniable that they reveal the referee’s evident error, or those that they are sure were not marked because they were not seen.

By force of the “absolute conviction principle”, assistant referees      should only mark clear offsides, those that do not raise any doubt.

In case of an offside in adjusted play and if in the same play or in its context a goal or penalty is scored, the “AV” will act and mark the offside.  With any other play, the “AV” will not act.

What cannot persist are calls for non-existing offside, that prevent goal scores, nor validating goals or penalty scores due to unmarked offsides.

Advantage: less match stoppages, more goals and all of them legitimate.

4.6) Undeniable serious foul play and physical aggression (violent      behaviour), unseen or badly decided by the referees. In these cases, the “VA” will act immediately, except if there is a goal advantage or a clear goal opportunity.

I) In first place, it goes without saying that technology, according to this project, will not prevent all referee errors.

However, there will no longer be clear, undeniable errors, which alter or could alter match results and undermine ethics.

II) The process can begin immediately and with no need of any special technological apparatus. The VA will use the same television images that currently prove the referees’ rights and wrongs.

The cameras can and should be strategically placed and in sufficient number to clarify all the plays.

This system will leave referees in a comfortable position, because the “VA” will correct those errors that could alter match results.  This way, the final decision will always be correct.

Note that the decision immediacy principle, which is the essence of refereeing, will not be affected by this system, on the contrary, it may even be strengthened, because currently the time lost in restarting a match in some of these plays is always superior to the time necessary for the “VA” to act.

IV) Due to the non-interruption principle, a match would only be stopped by the “VA” in the following plays:

In all other situations the “VA” will act with the match already paralysed.

V) The “VA” will not act in plays which are not fully clarified by the images. Note that in these cases, there will still be no proof of a referee’s error.

It is obvious that camera adjustment in strategic places will prevent this from happening, especially in open, clear plays, which are the ones that cause revolt and reduce football’s credibility.

VI) A Video Assistant – “VA” must have profound knowledge of football laws and a lot of prudence, therefore only very experienced referees or former referees with proven capacity should perform in this position.

VII) We note that the process can be implemented gradually and that, as soon as football culture absorbs the first steps, this technology can be adopted for all the mentioned plays and, even, others not seen here, as long as the non-interference and non-interruption principles are duly respected.

Technological evolution in the world is irreversible and football cannot be the only segment to reject it.  After all, a correct man calls for correctness in all acts and facts of life!

Those that think football needs referee errors to increase its attraction commit an ethical root mistake as well as of knowledge of the essence of sport, because football is exciting, beautiful and attractive due to its goals –  both made and lost,  its dribbles, its passes, etc. etc.

For this reason, it is necessary to set aside the stigma that roguery, trickery are features of this sport.

and CSF representative  in TAP/IFAB