Dissatisfaction with VAR seems to be back with a vengeance after the incidents of last weekend, with a meeting of Premier League clubs scheduled for next month to discuss the implementation of remote technology and look into the reasons referees have been avoiding their pitchside monitors.

Most of us imagined the ability to check a quick replay on the sidelines would be all officials needed to sort out contentious incidents not readily picked up in real-time. When VAR was being dreamed up the general idea seemed to be that travesties on the pitch that led to the referee being besieged by aggrieved defenders – think Thierry Henry’s sneaky 2009 handball against Republic of Ireland to take an old but obvious example – could easily be ironed out if the official in question were allowed a quick peek at a monitor. A short delay in the game might not be ideal, but a better option surely than allowing a cynically illegal goal to stand. 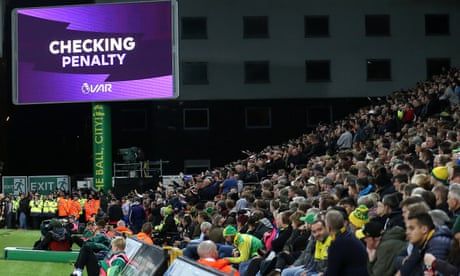 In practice VAR has not worked out anything like this and not simply because English referees have made some sort of pact to disdain pitchside monitors for fear of holding up games for too long. This season there have been more than two dozen refereeing decisions overturned by VAR and not once has the referee trotted off to the available TV screen to have a look for himself.

The rationale appears to be that there is not much point peering into a portable black box when there are more officials with better screens and more playback opportunities in Stockley Park, yet this sort of distant, detached micromanagement has led to numerous complaints that the spontaneity is being sucked out of matches. Football is an emotional game, about a million people have already said this season, and for players and spectators alike the attraction is sharing that emotion together, not having to wait 30 seconds or more to see whether it is OK to start leaping around.

About a month into the season a voluntary moratorium on moaning about VAR seemed to take hold because it was all getting a bit boring and repetitive and it was generously imagined that any system would have teething troubles before settling down to run smoothly. That may still happen at some point but for now VAR not only keeps coming up with new controversies, it is introducing travesties into games instead of clearing them up.

The penalty awarded against Michael Keane at Brighton last Saturday was a case in point. Though clearly looking at the ball and not seeking to foul his opponent in any way, the defender accidentally stepped on Aaron Connolly’s toe in the act of playing the ball. Pre-VAR, such an incident would have gone completely unnoticed. Not only was the contact slight and trivial, the attacking player would have risked a card for diving had he hit the deck in search of a penalty, because no one would have been able to work out what sort of foul had taken place. The subtle difference now is that a player in search of a penalty for any sort of felt contact can be fairly sure VAR will back him up.

Andy Burnham is an Everton fan, as well as the mayor of Greater Manchester, but he raised a valid point when he described VAR as a nitpickers’ charter. That is precisely how it is operating and the Premier League meeting would do well to discuss that rather than the slow take-up of the pitchside monitor facility.

In fairness to paying spectators inside stadiums, what referees should start doing anyway is calling for replays to be played on the big screens, rather than pitchside monitors. It has long been ludicrous that people at games should get less information and less of a view than people watching from their sofas. The couple of major stadiums still without big screens – Anfield and Old Trafford – will just have to install them. It’s called progress. 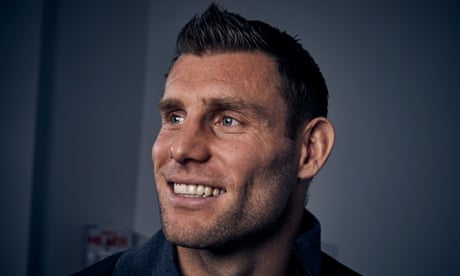 James Milner: ‘I’m not a fan of VAR … the atmosphere is being ruined’

The other aspect of VAR that urgently needs discussing is the number of perfectly good goals that have been disallowed for microscopic measurements of offside. The technology is at its most nitpicky and intrusive in this area, and there is simply no need for replays to be pored over again and again just to establish that someone was ahead of the offside line by a knee or a big toe.

The game should not really be interested in distances that small, because both attacker and defender are likely to be moving rather than static when the ball is played and unaware of the precise location of the line that will eventually be applied on-screen by remote officials. In those circumstances a player cannot possibly know whether he is an inch or two offside, and therefore cannot be accused of seeking to gain an unfair advantage.

Being broadly level with the last defender cannot be regarded as cheating – it is part of the forward’s remit to be as far up the pitch as permissible – but the effect of VAR has been to wipe out the concept of level. You are always going to be slightly on or off, even though you might not know which until a minute or so later when your potential winner has been disallowed.

This is a wholly unsatisfactory situation, annoying for everyone in the stadium, and in view of the likelihood that precise measurements are here to stay, the offside law itself needs looking at. If you are not deemed to be goalhanging when you are level, why would you be assumed to be gaining an unfair advantage if you are momentarily caught a couple of inches in front without realising it? The old concept of daylight between attacker and defender might be useful here, except VAR would doubtless end up spending most of its time measuring the tiniest of gaps before sanctioning goals. A more workable idea is that a player should be considered onside if any part of his body is onside. It is not perfect but it is better than seeing goals chalked off for offsides both fractional and accidental.

As with the Keane incident at Brighton, VAR cannot seem to differentiate between the accidental and the deliberate. The old certainties about what constitutes a foul inside the area or a player being caught offside are being eroded dangerously quickly. The technology is already impressive and will only get better; what is important, as ever, is that the game is careful about how best to use it.